The algorithm consists of nodule detection and cancer classification based on 3D convolution neural networks. The model receives preprocessed 3D lung scans as input and outputs both the bounding boxes of suspicious nodules and the probability of getting cancer.

Neither mentioned in the repository nor in the technical report, but since the authors had to accept the Data Science Bowl rules, the code must be published under MIT license.

First, a binary mask of a lung is applied to the data to filter out as much noise as possible. Next, a CNN is trained to detect nodules that might be malicious. Lastly, another CNN takes the top 5 nodules that appear to be most malicious and tries to predict whether the patient has cancer. For both networks data augmentation is used to artificially increase the amount of data on which they can be trained.

All raw data is first converted into Hounsfield units. It is then clipped with the window [-1200, 600] and then transformed linearly to [0, 255]. Next, a binary mask of the space inside a lung is calculated.

The mask is multiplied with the raw data in order to quickly remove noise that does not belong to the lung. Everything outside of the mask is padded with 170. All values greater than 210 (typically the bones) are replaced with 170 as well. The padding value 170 is chosen to resemble the intensity of tissue.

Due to the memory constraints of the GPU, patches of sizes 128 x 128 x 128 are cropped from the lung scans and then fed to the network. 70% of the patches contain at least one nodule while the remaining 30% may contain no modules. If a patch goes beyond the range of the lung scan, it is padded with the value 170. For data augmentation, patches are randomly left-right flipped and resized with a ratio between 0.8 and 1.15. Oversampling was used for big nodules in the training set to achieve a more balanced distribution of nodule sizes. Also, hard negative mining was used to further balance the training set. The network structure looks as follows: 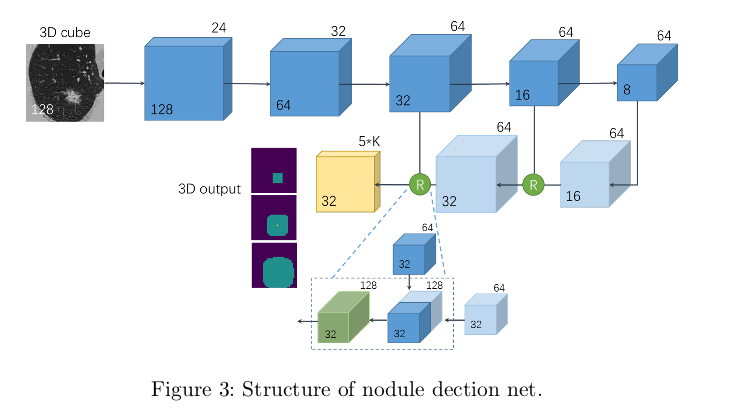 After the nodule detection net (N-Net) was trained, the authors applied it onto the whole 3D scan of each patient. The top 5 proposed nodules of the N-Net are then fed to the cancer classification net. Next, they proceeded as follows:

We extracted the last convolution layer of N-Net for each proposal, which is a 32 × 32 × 32 cube of 128 features shown in Fig. 3 as a green volume. We max pool over the central 2 × 2 × 2 voxels of each proposal, and pass the resulting 128-D features to two succeeding fully connected layers to generate a prediction of cancer probability. We assume the final diagnosis is made from these 5 proposals and a hypothetical dummy nodule (in case N-Net missed some nodules) independently.*The whole approach can be seen in Figure 4. 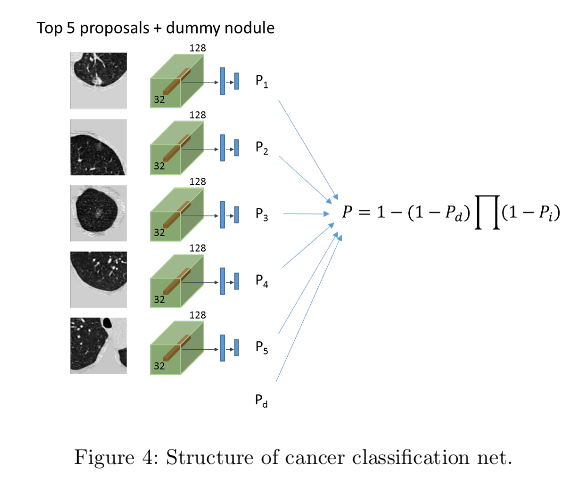 The prediction loss is defined at the right hand side of Figure 4 where P_{d} is a free parameter representing the cancer probability from the dummy nodule.

Usage instructions:Running main.py should use the final models to create the output files for the Data Science Bowl.

I did not manage to run the complete algorithm so far as I’m lacking CUDA. @reubano attempted to port it to Python 3.5 here.

Porting to run on CPU and GPU¶

Since modules such as DataParallel are used, it appears to be non-trivial to make the algorithm run only using a CPU.

Improvements on the code base¶

As expected from a code base created at a competition, most of it is completely undocumented.

Multiplying the data with a binary mask of a lung is a nice way to remove noise that does not belong to the lung itself. Also, using CNNs definitely makes sense as the weight sharing decreases the amount of memory needed by the model.

The accuracy and ranking of the algorithm speaks for itself. Though, I’m not sure how easy it is to re-use as it is completely undocumented, written in Python 2.7 and it took 8 TITAN X to train it. Hopefully, to segment a nodule it also works on a regular GPU of a desktop PC.